Working Together to Improve Learning in Indonesia 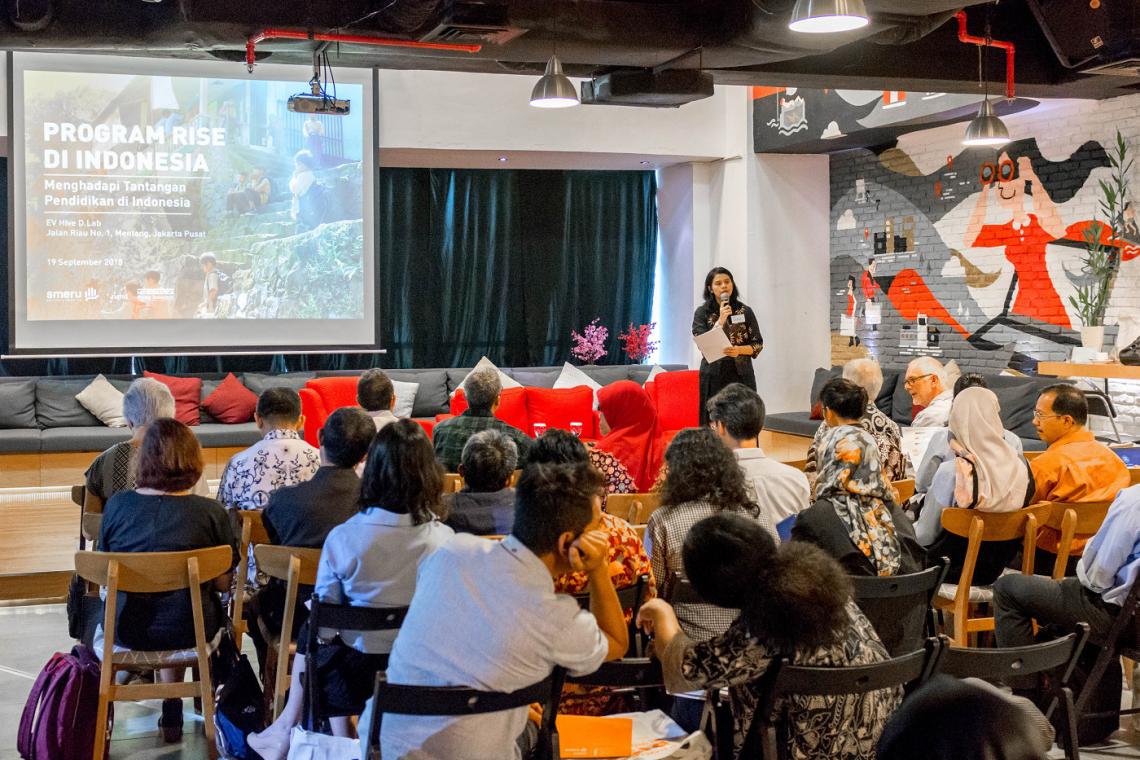 Education stakeholders from various non-governmental organisations were enthusiastic in taking part in the RISE Programme in Indonesia discussion: "Facing the Challenges of Education in Indonesia". | Photos: Mukti Mulyana

How can we improve learning in Indonesia?

Indonesia is currently facing the challenges of education 3.0: improving the quality of learning. Aside from the Government, parties engaged in the education sector ranging from education institutions, teacher training institutes (LPTK), non-governmental organizations, research institutions, communities to private sectors continue to seek the best ways to overcome various problems in Indonesian education system, which result to the country’s low education quality.

Recognizing the importance of collaboration with parties involved in the efforts, RISE Programme in Indonesia held a discussion entitled "Facing the Challenges of Education in Indonesia" on 19 September 2018 at EV Hive D.Lab Coworking Space Menteng, Jakarta. The interactive and in-depth discussion attended by stakeholders of the education sector was intended to collect input, evidence, and insights that can contribute to the efforts of improving the quality of learning. The discussion, hosted by Sari Soegondo, also aimed to inform education stakeholders on the progress and initial findings of RISE’s research in Indonesia.

Asep Suryahadi, Director of SMERU and Chair of RISE Steering Committee delivered the opening speech; he spoke about the background of RISE Programme in Indonesia. Asep also mentioned that the discussion was the second time organized by RISE after previously held at the Ministry of Education and Culture office in collaboration with its research and development unit (Balitbang) and the Ministry of Research, Technology, and Higher Education.

Indonesian Learning Profile: Children Are in School, but They Are Not Learning

“What is 1/3-1/6?” The first speaker, Sudarno Sumarto, Team Leader of RISE Indonesia, began the first session of the discussion by asking that question to the audience. Some answered correctly. He then revealed a quite worrying fact: in Indonesia, less than 3% of children in grade 4 primary school and less than 7% of adult respondents aged 28 years were able to work on simple fractions.

Sudarno continued to talk about the condition of education in Indonesia, which actually experienced significant progress over the past few decades: increased enrolment and the availability of school facilities and infrastructure. He then asked another question: are the children who attended school also learning? 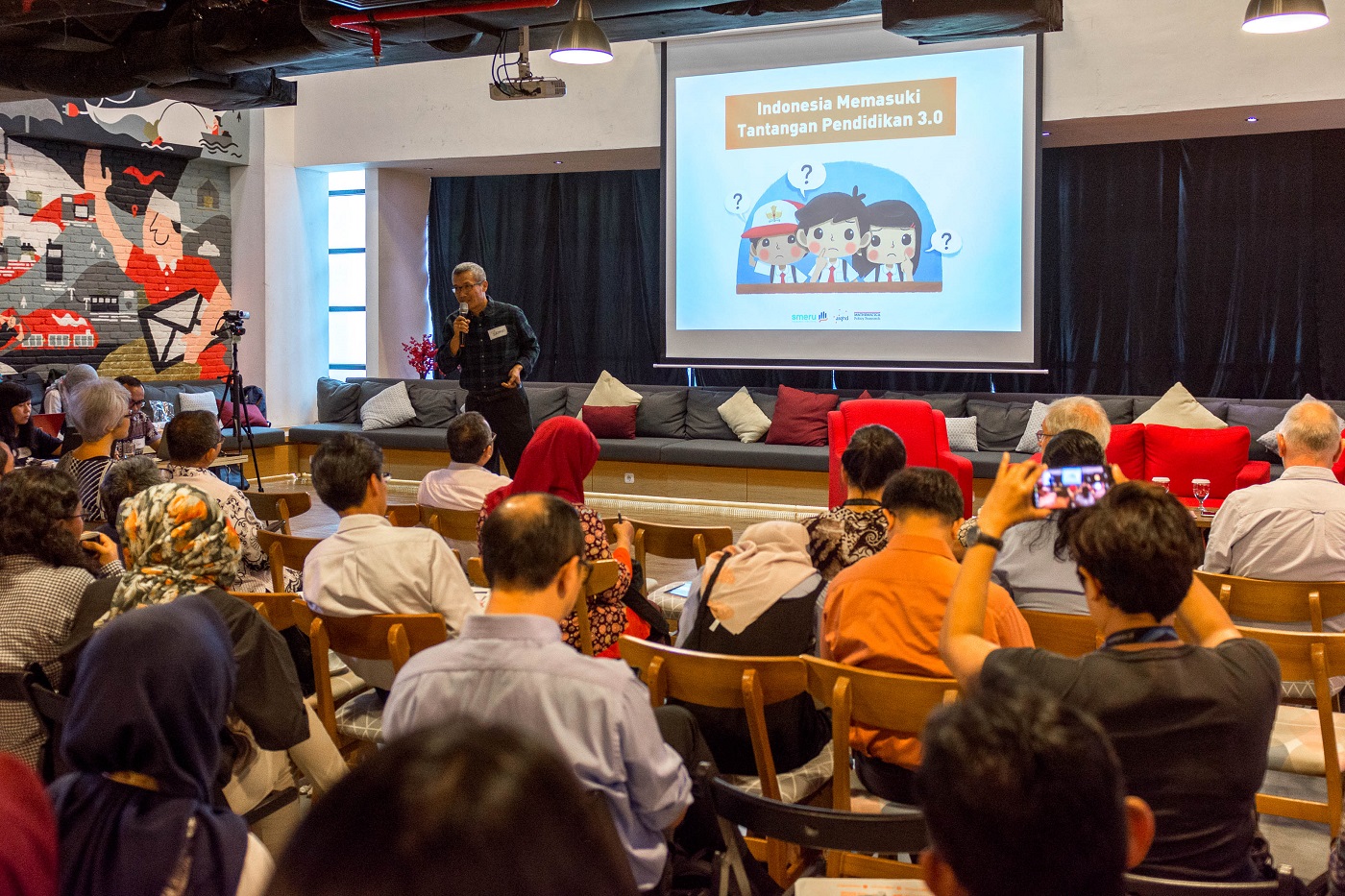 The Indonesian Learning Profile prepared by RISE research team—using Indonesian Family Life Survey (IFLS) data—shows that the level of student learning in Indonesia only experienced a slight increase (around 11%) after attending school for 12 years. In addition, the increase in inter-level learning outcomes was not too large and there was even a decline between the 2000 and 2014 learning profile. The said condition serves as background for the implementation or RISE Programme in Indonesia, which will focus its research on two major topics: teacher reform at the national level (Reform Area A) and education policy innovations at the district level (Reform Area B).

Experience from Interventions Carried Out in Districts

In the second session, three speakers shared results of a number of interventions that had been carried out in several districts. Dewi Susanti, Team Leader of KIAT Guru, talked about the implementation of KIAT Guru Programme, which aimed to reduce the number of teacher absenteeism in the 3T regions (the outermost, frontline, and disadvantaged) through community empowerment and pay-for-performance mechanism. According to Dewi, participation and support from local government as well as society are important to ensure the programme can work properly and accordingly in improving learning outcomes. 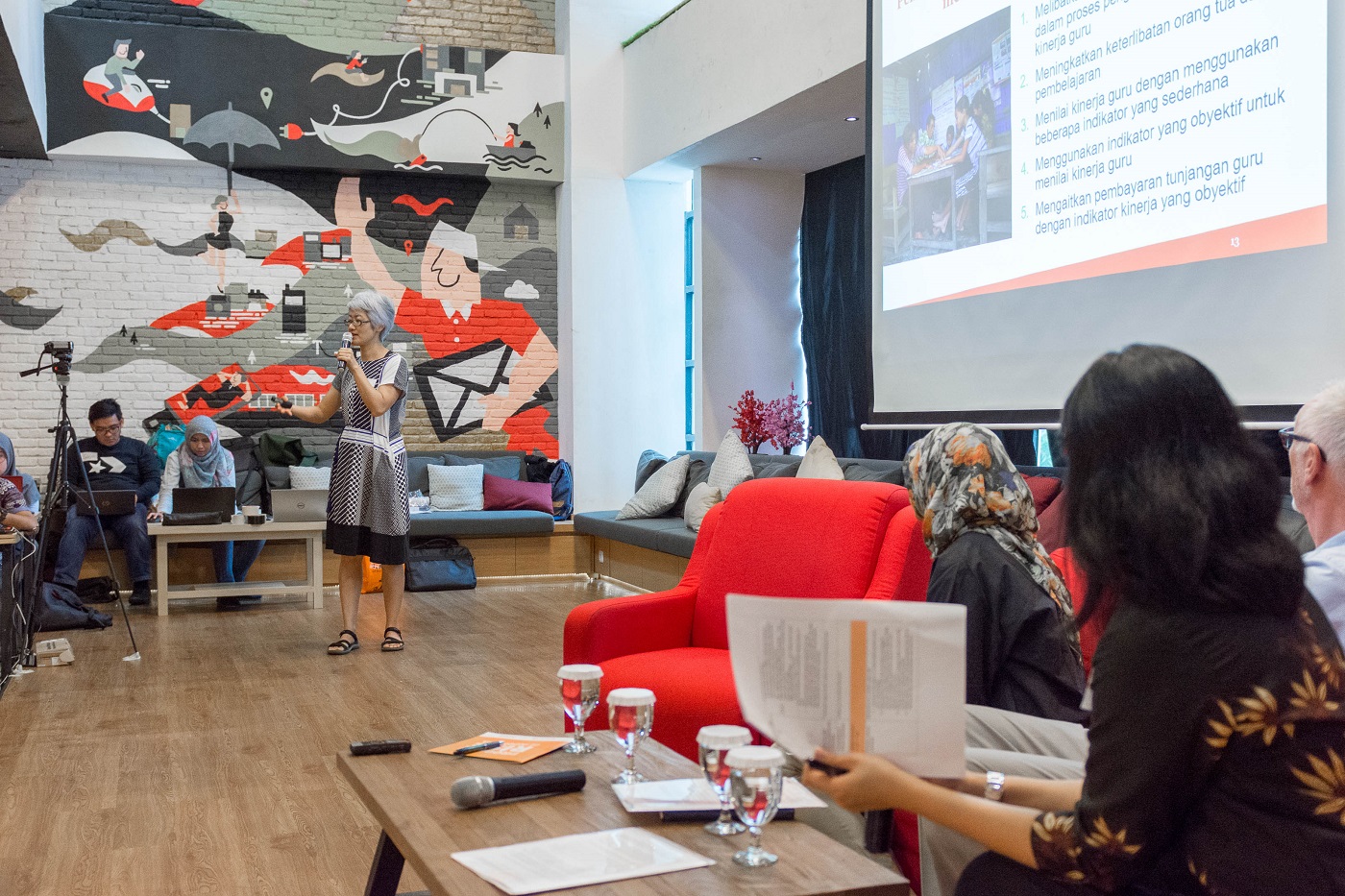 Dewi shared findings from KIAT Guru programme which has been implemented in a number of districts in Indonesia.

Next was Niken Rarasati, RISE researcher, who presented the initial findings of RISE’s research in Way Kanan and Kebumen districts. In Way Kanan, existing education policies have not directly led to the improvement of learning. In addition, learning still uses traditional methods, such as teachers reading from text books and then discussing problems together with students.

Meanwhile, education policy innovation in Kebumen seem to be corresponding to learning. Teachers’ understanding on the method of interactive learning is observably good. However, teachers have yet to link the frequently performed interactive activities to subjects that they teach. In the end, they only write the lessons learned on the board and ask students to copy them and fill out questions unrelated to the interactive activities. The case in Kebumen is known as isomorphic mimicry; the process of adopting a best practice but is actually narrowed only to its design or procedure without understanding the root of the problem in which the practice tries to solve. 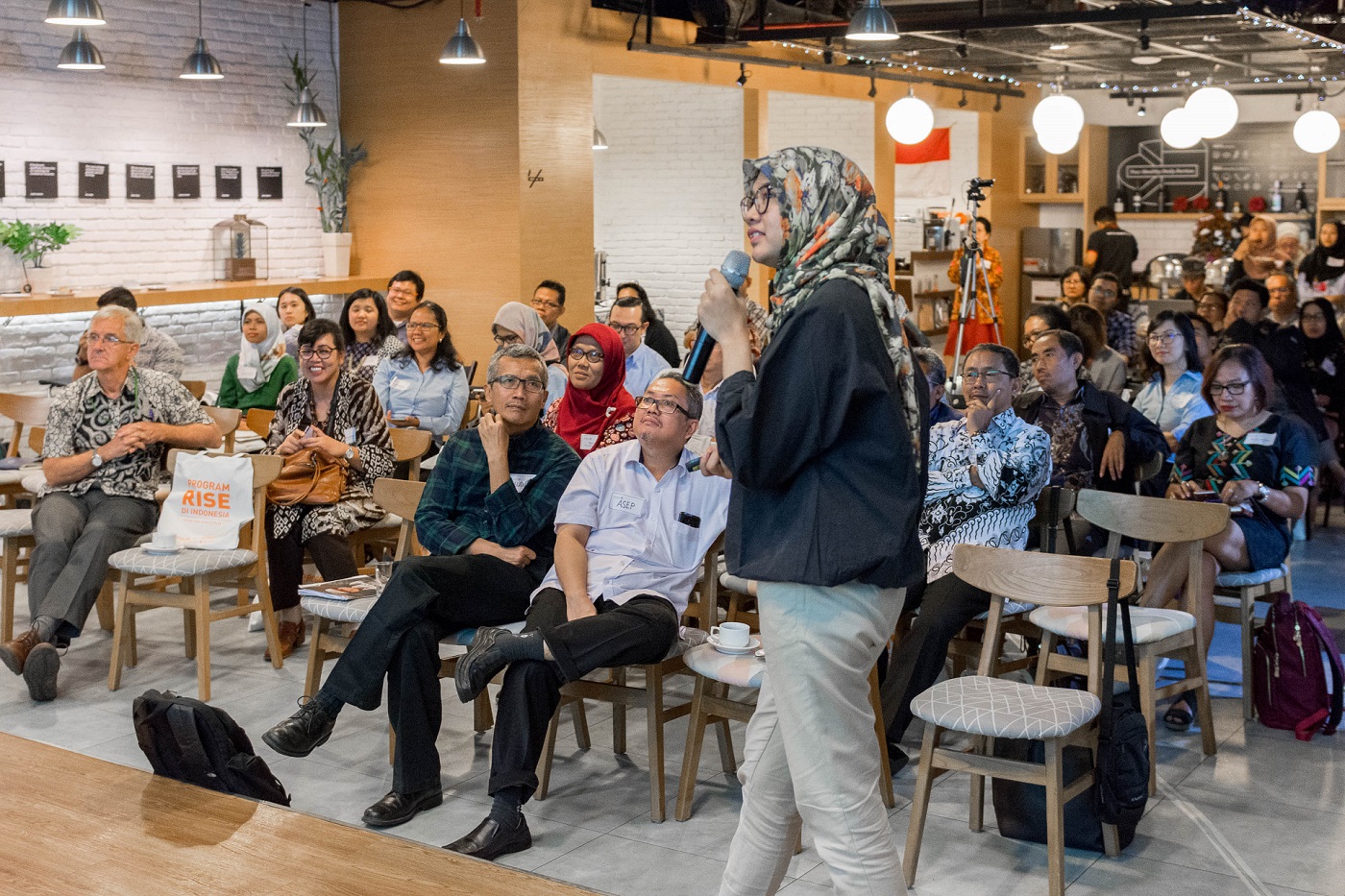 Niken illustrated RISE’s initial findings in Way Kanan and Kebumen districts using parable of two cars. The first car (Way Kanan) has no wheels, while the second car (Kebumen) has complete parts, but both of them are not working.

The last speaker was Mark Heyward, Programme Director of the INNOVATION Programme, who spoke about the Good Teacher programme that facilitates teachers so that they can determine the problems they face and how to solve them independently. One of the lessons learned from the INNOVATION Programme is that teachers in Indonesia actually have the ability to innovate when granted with opportunities and support. 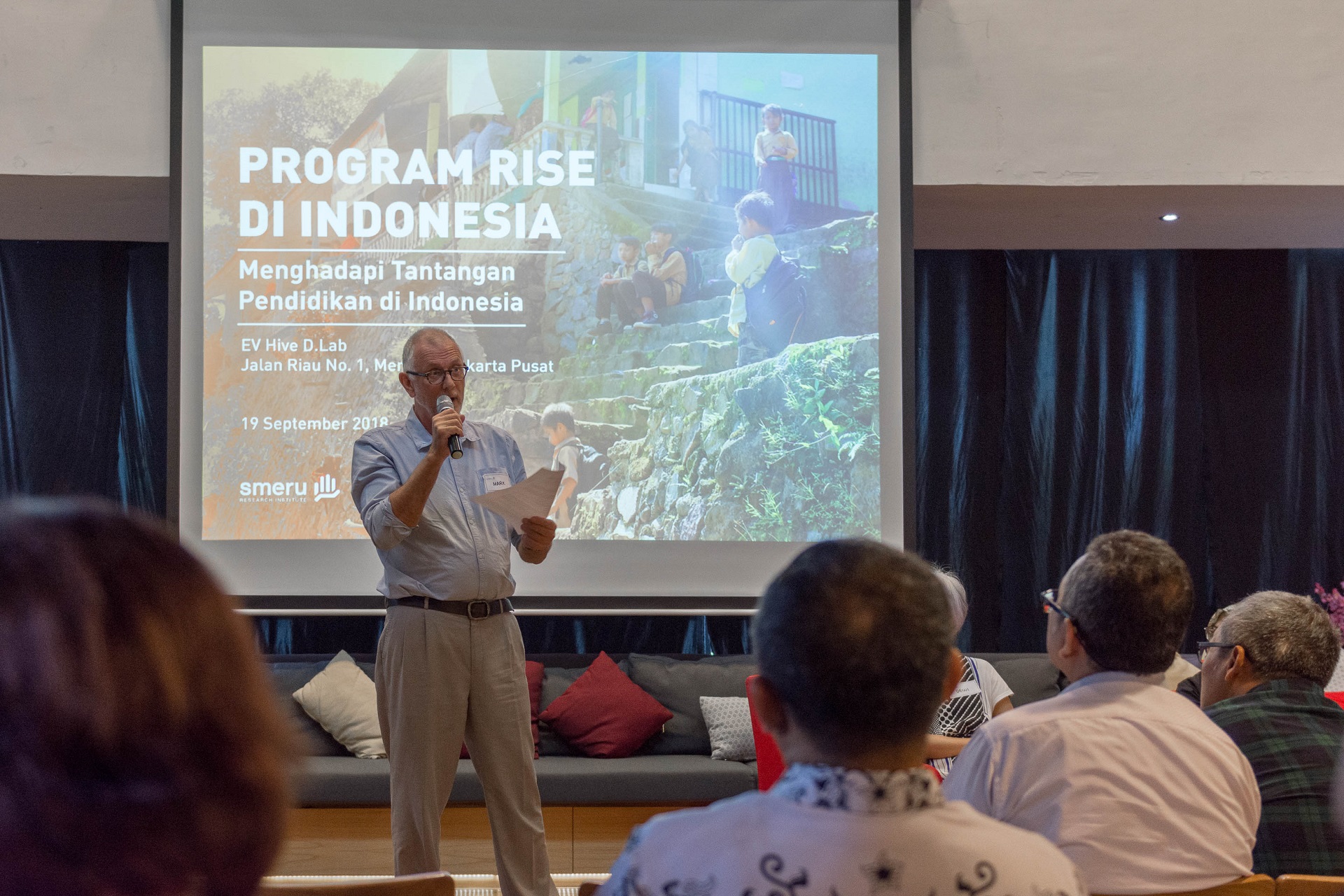 Mark talked about the intervention that was implemented by INOVASI programme and what can be learned from the field.

Group Discussion: What does it Take to Improve Learning?

In the third session, participants were asked to discuss in groups regarding the topics shared by the four speakers. One of the questions raised was about what measure that participants—whose works are engaged in the education sector—can take to improve the quality of student learning. The results of the discussion can be summarized into three major points: 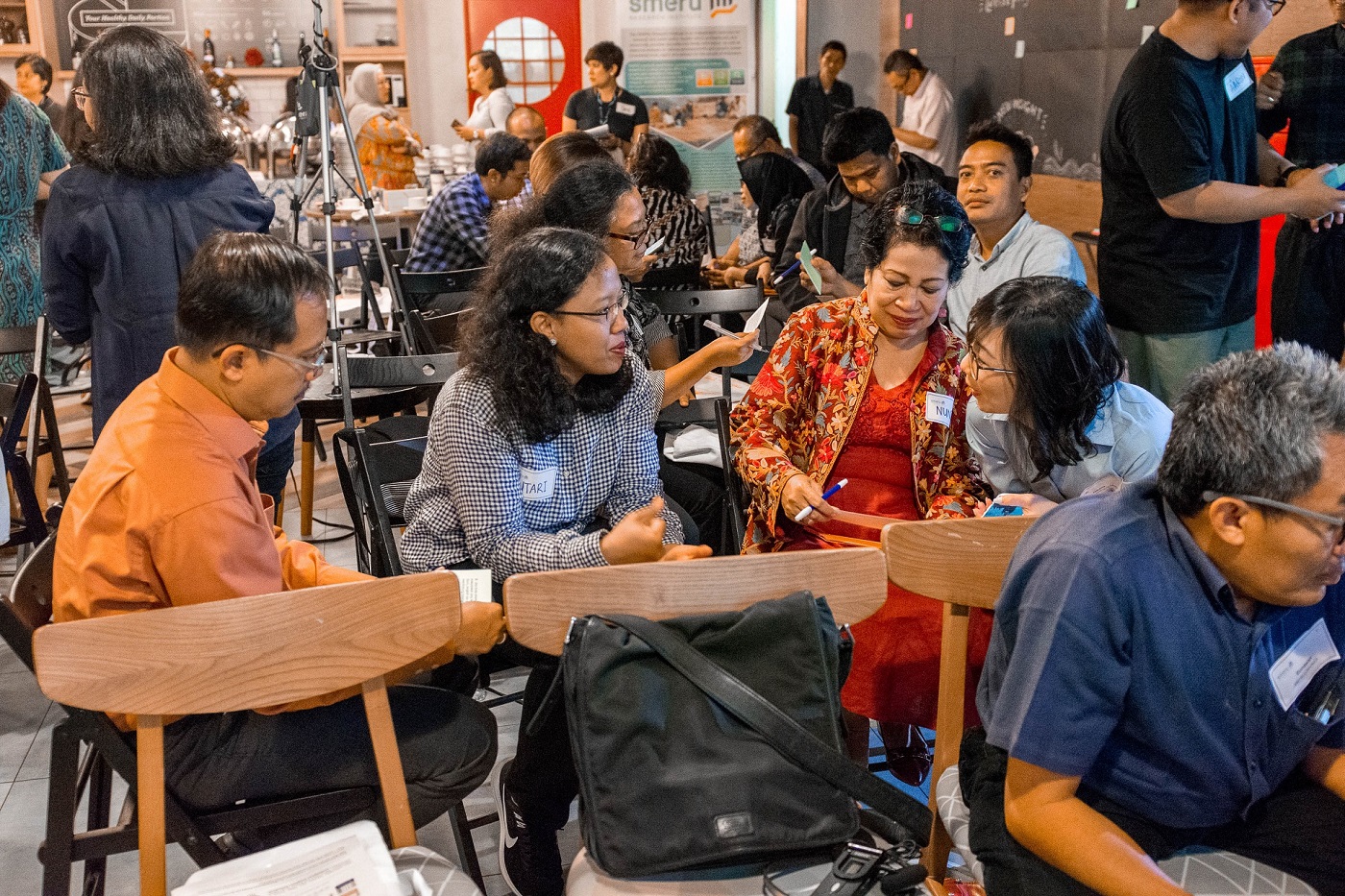 Participants actively discuss answers to the questions surrounding topics that have been presented by the speakers.

Discussions on other topics also went well; the participants actively expressed their opinions and inputs. The common thread was that it is important to understand the local context in implementing an intervention—not only at the district level, but also at school level because each school has different characteristics. Another relevant input was the need to involve teachers in designing the intervention and to build the mindset that teachers’ responsibility should be focused on students. This way, internally, teachers will be more motivated to carry out their responsibilities. 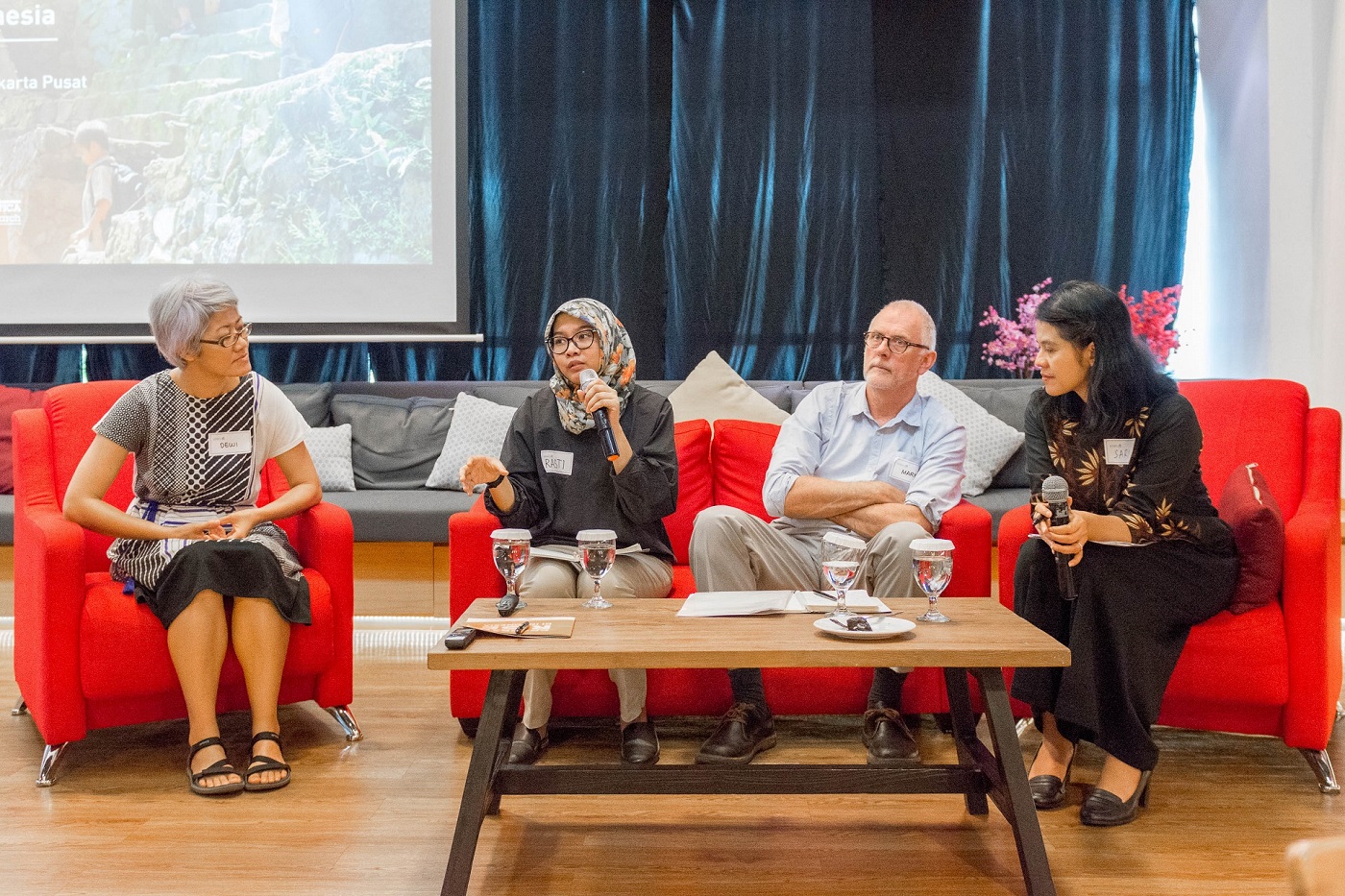 The speakers giving responses to the group discussion's result, which was presented by the participants during the sharing session.

Deputy Team Leader RISE Daniel Suryadarma delivered closing remarks by summarizing the results of the discussion: one problem-solving strategy to ponder, behind the severity of the challenges of education in Indonesia, is to replace the framework of thinking in viewing education problems. The widely-used framework that sees the problem from "top to bottom" must be changed into "bottom up" considering Indonesia is a large country; has many administrative areas and languages; and various cultures. Therefore, to make policies that can accommodate regional uniqueness, it is important to design and evaluate policies as well as innovations at the district level before they are adopted and generalised into national policies.

Although the discussion has ended, the challenges of education in Indonesia remains a homework. Collaboration of all involved parties could be key to overcoming existing obstacles. The Government, education stakeholders, society, teachers, and students have equally important roles and all need to take action.

Let’s work together to improve education in Indonesia!

Video and presentation files can be accessed here.

Photos from the event can be accessed here.